Oldest Cartographic Depiction of the Holy Land in Mosaic Form

Part of a floor mosaic in the the Church of St. George, Madaba, Jordan, the Madaba Map is a map of the Middle-East including the oldest cartographic depiction of the Holy Land. 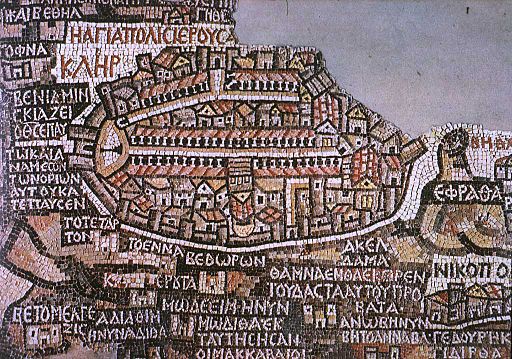 Depicting an area of Lebanon, the Nile Delta, the Mediterranean Sea and the Dead Sea among others, the largest and most detailed part of it depicts Jerusalem in the centre of the map. Dating to the 6th century and originally over 16m long and 6m wide, the map was discovered in 1894 during the construction of a Greek Orthodox Church after being lost due to an earthquake that hit Mardaba in 746.

In the following decades, large portions of the mosaic map were damaged by fires, activities in the new church, and by the effects of moisture. However, in December 1964, the mosaic was saved thanks to the Volkswagen Foundation, whichdonated 90,000 DM to the "German Society for the Exploration of Palestine" to restore and conserve its remaining parts.